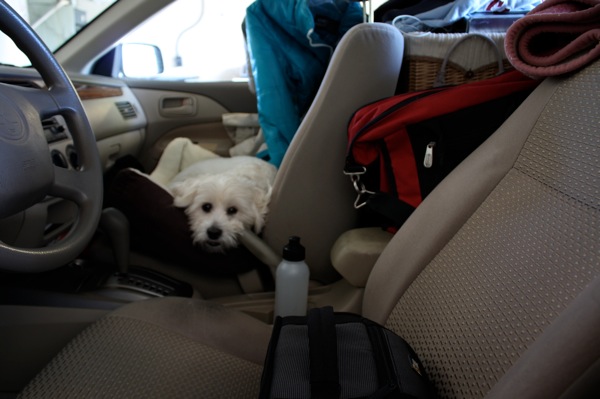 I was going through all the drafts I'd written for this blog, and found this post I started in December 2011. Laura and I had just moved from Los Angeles to Seattle the month before. Everything was new, exciting, exotic. We were in love with the city (and we still are) and we didn't even notice the rain despite the fact that it was the fall going into the winter.

(Dec'11) My wife and I moved to Seattle a month ago. The move surprised many friends. Why did you guys move to Seattle? it's hard for us to answer the question why we moved because honestly, we moved to Seattle because we wanted to move to Seattle. We had the idea in September, left LA at the end of October, and arrived in Seattle on November 1st.

The number of people assuming us moving for jobs is surprisingly high. In fact, 95% of the time this is the first follow up question after the initial question - is it for a job? People assume we moved for jobs. Well, more people should move for reasons outside of career. You should move to a new city because of the city, because you want to experience what it's like to live there. You should move to a new city to have a different perspective, to make new friends, to learn a new culture, to meet new challenges, to enjoy extended traveling. Move proactively.

Of course it's risky to leave your comfort zone, to leave what you know works behind. Adapting to a new environment can be a lot of work. Finding new friends, learning new customs, being an outsider...etc none of this is easy. But moving is well worth the effort (while you still can), provided you follow this simple rule:

My family moved quite a bit when I was growing up. We moved to Taipei from a small town in the middle of Taiwan when I went to middle school. We moved three times in Taipei. When I turned 18, I moved to Michigan, then LA, then San Francisco, back to LA, then Tokyo. Each move helped me get to the next stage in life, and each move enabled me to expand my world little by little.

I don't know what's in store for me in Seattle yet, but I can't wait to see more.

I've always enjoyed moving to a new place. Despite the huge amount of time and energy required to pack, uproot, and physically move everything you have to a new location, moving has two extremely valuable benefits - it stimulates and cleanses. I've talked about how moving stimulates in the draft above. Let's talk about how moving cleanses.

We go through life accumulating stuff - stuff we need, stuff we want, and stuff that somehow just landed in our hands. Even when I knew I wasn't going to stay in the same city after a short summer internship, I managed to pack the small and empty apartment full of stuff within 10 weeks. I moved around often so I always try to avoid buying things I don't need, but despite my best effort, it's hard not to accumulate stuff.

The reason? It's a lot easier to get new things, than to get rid of them.

A lot of it has to do with nostalgia. We place meanings onto things. Old worn-out shoes that's been to the Great Wall with me? Saved in a box under the bed. Sunny (my dog)'s first collar? Kept in his toy box (just in case he misses the smell of it). Concert tickets, movie stubs? We need boxes to keep them all safe and accessible.

My suggestion? Take pictures of them, keep them virtually available on your harddrive, and throw most of them away. The pictures will be enough to remind you of your happy memories, and you are more likely to actually see them again since they are on your computer instead of under the bed collecting dust.

We also make impulse purchase decisions and accumulate things we don't necessarily need. It's not easy to stop doing this, and to be honest, the guilty pleasure of buying a small something-something to make your week is a pleasure worth having. But having too many of these takes up too much physical space in your home, as well as mental space above your neck.

Moving forces you to think twice about what to keep, and what not to keep, especially if you are moving into a smaller space, or a more crowded area. When you don't have a lot of room, you start to focus on the essentials - things that are important for your personal life, professional life, and overall happiness. Everything else? Donate and recycle.

The flooding of the Nile has been providing a natural cycle of life for centuries. It washes away all that's stale and fertilizes new beginnings. In more than one way, moving is the same and gives ways to new beginnings. Will I move every other year? I won't do it just for the sake of moving, but when the right city shows up on our radar, I can't promise we won't be tempted to do this all over again.

This blog does not have any tracking, and I am still looking for a commenting solution that does not track visitors. For now, you can tweet to me about Moving, and Moving to Seattle.