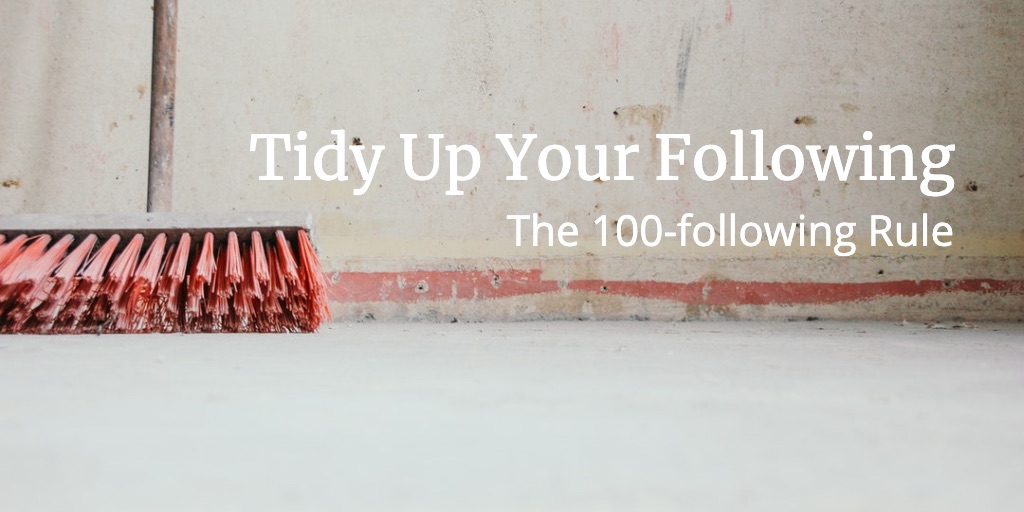 Why We should KonMari Our Social Follows

A number of years ago I read Kevin Kelly’s essay on 1,000 True Fans. The idea that if you can find and grow an audience of 1,000 true fans that love what you do, you can be financially independent as a creative maker.

I liked this theory, and decided I will put it to practice by reducing the number of people I follow on Twitter.

I tend think in opposites, and when I learned about the theory of 1,000 true fans, my first thought was — how would the people I am a fan of know if they’ve got 1,000 true fans if I am following both my heroes, and also people who I find interesting but not really a true fan of? So I decided to create a 100-following rule — if everyone is limited to only following up to 100 people, we’d all be able to identify our fans and heroes much easier.

Social media is a great way to manage fans in theory. People like what you do, and they follow you. I have discovered and followed more YouTube creators in the past year - many of whom I truly admire their talents in storytelling , analysis, and in videography.

In practice however, we follow people on social media for other reasons than what they create. Perhaps you feel obligated to follow someone you know simply to reciprocate. Or you follow a celebrity in your industry because everyone else is following them and you don’t want to miss out.

Or sometimes you just want to remember someone who seem to be doing cool things. Even though you might not enjoy the content they produce on the specific social platforms (tweets, photos, videos…etc.). Not everyone who works on cool projects are great at social media — they might be tweeting things you care little about other than the cool projects you are interested in.

The problem with following people you are not a true fan of is that the noise prevents you from seeing content from your heroes. It prevents social platforms from doing what it’s great at - building those meaningful connections between fans and creators.

Twitter is my main social tool. I use it to learn all things new and interesting in tech, software, indie games, and economics/business. And I use the 100-following rule there, limiting the number of people I follow to 100 people whose tweets I truly value. For friends and professional contacts, I rely on other tools (Facebook, Linkedin, messenger apps…etc.), and for people who I find interesting and just want to bookmark and be able to find them later, I save them on Markd.

I found a great tool to trim Twitter following on Glitch (lots of wonderful little apps and coding projects on there). It’s called Tokimeki Unfollow — KonMari your Twitter follows. It shows only tweets from people you are following when asking you if you want to keep following them, hiding their bio so that you are making the decision only from the content.

Do your heroes a service and trim your following!

This blog does not have any tracking, and I am still looking for a commenting solution that does not track visitors. For now, you can reply to my tweet about Tidy Up Your Following — The 100-Following Rule.